I've been involved in design and print for the past 23 years. To be honest I've never thought about which job, of the thousands of jobs we've done, was the best. Perhaps it’s not a matter of reflection as much as it is being open to receiving it...and when this order came in I recognized it instantly.
Oddly, it’s not a project that I'd spent much of any time thinking about, reeling in, or anything like that. It's not even a large order by most standards; as a matter of fact this order was for printing one. Yes, one.

This was an order for printing diplomas and certificates for a college. We've done it before for several of the schools in Boston, but this contained my wife's diploma. This June she will be ordained as a rabbi after seven years of study.

That alone is an accomplishment worthy of note. For me part of what makes this so special is what it took to get there. What started as the fulfillment of a lifelong dream turned into a long and unexpected journey.

Not only did my wife start her studies at age 60, an age that most people do not embark on new careers, but two years into the six-year program she was diagnosed with cancer. Throughout it all she never doubted the completion of her studies! In the process she was transformed into a wellspring of wisdom and spiritual awakening, while exhibiting grace and gratitude. I was witness to her finding blessings throughout the whole experience. She has truly earned the honor and title for which she has worked so hard. How fitting, for me, that a symbol of this work is represented with a printed document! 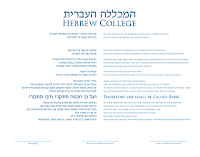 I've often spoken of the role of print in the age of the internet of things. Of all the examples that can demonstrate the importance of print, a diploma…especially this diploma is the epitome of the power of print!
Posted by Rick Sands at 5:44 PM